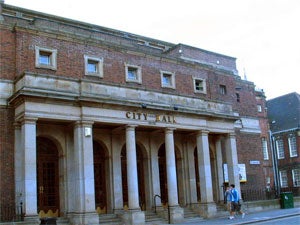 Newcastle City Hall prides itself on showcasing the finest acts from around the world, be it Rock, Pop, Comedy or Musicals the biggest names in the business play the City Hall. Opened in 1927 as part of the redevelopment which also includes the City Pool, City Hall has hosted concerts by major British Orchestras featuring conductors such as Sir Malcolm Sargent and soloists as Yehudi Menuhin and Kathleen Ferrier. In addition local choirs and societies hold their annual concerts here and there were celebrity recitals and talks as well as Civic functions.

The 60's saw the cultural explosion of pop music and the hall was soon playing host to "package tours" featuring The Beatles, The Rolling Stones, Little Richard and Jerry Lee Lewis, as well as Newcastle's own "Animals". Many shows featuring five or six acts such as Gerry and the Pacemakers, Gene Pitney, The Kinks and Marianne Faithful on one bill could be seen for 10/6 (52p) or less.

The City Hall has continued to host almost every rock and pop "great" since the 60's as well as seeing the first tours of future legends. Throughout the 70's, 80's and 90's the City Hall has maintained its position as one of the best and most used 2000 seated venues in the country, and one of many artists favourite gigs. Bruce Springsteen rates the City Hall show in 1981 as one of his three best shows and both Dire Straits and Elton John insisted on starting world tours in the Hall.

As well as music the City Hall has a tremendous reputation for comedy and has seen multiple sell out shows by Billy Connolly, Victoria Wood, Reeves and Mortimer and more recently Little Britain.