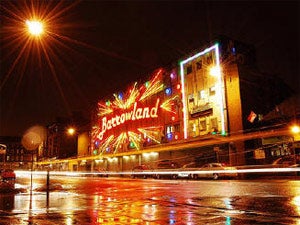 The Barrowlands (more properly The Barrowland Ballroom) is a major dance hall and concert venue in Glasgow, Scotland. The original building opened in 1934 in a mercantile area east of Glasgow's city centre. The "Barras" street market (more properly Glasgow Barrowland market), after which the area and the ballroom are named, continues until the present day. The Barrowland building includes large street-level halls used for the weekend markets, with a sizeable weatherproof hall above. The front of the building is decorated with a distinctive animated neon sign.

The Ballroom was the leading dancehall in Scotland from its inception. The serial killer Bible John is believed to have met his victims at dances in the Barrowlands. The building was largely destroyed by fire in 1958, leading to a complete rebuild. The rebuilt ballroom opened on Christmas Eve 1960.

Latterly, with the decline of dancehall and the rise of rock/pop performance, the Ballroom has become a major concert venue. Known for its excellent acoustics (a design imperative for the unamplified orchestras which formerly graced its stage), as well as its sprung dance floor, the Barrowlands has become a particular favourite of many noted rock/pop acts. Although its modest capacity (around 1,900 people) is small compared with several other Scottish venues (the SECC, Ingliston, and various stadia) the Barrowlands punches above its weight in attracting top-name performers, and was recently voted the best music venue in the UK in a poll of British bands, and in another survey amongst bands, was voted 2nd best venue in the world.