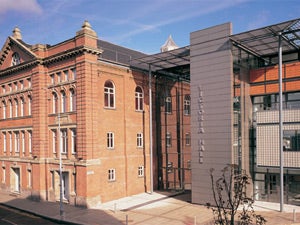 The Victoria Hall, was built in 1888 to the designs of Hanley's Borough Surveyor, Joseph Lobley to commemorate Queen Victoria's Golden Jubilee. Built in local red brick and terracotta, the classical Grade II Listed venue originally held 2,800 people, and has, over the years been the scene of numerous concerts, wrestling contests, boxing matches, and many rock gigs.

By the mid 1990s the City Council had identified the Victoria Hall – which although in need of a revamp was still operating successfully as a touring venue – as the potential catalyst of a cultural resurgence. A planned revamp of the Victoria Hall, along with plans for a new theatre through the conversion of a stunning Art Deco cinema, and a raft of public realm improvements, formed the City Council’s ‘Cultural Quarter’ initiative.

Levitt Bernstein were selected as architects for the scheme and produced a stunning adaptation and extension of this great building, providing first class new facilities. The new Victoria Hall opened its doors in 1998, and has since been able to exceed all of its visitor targets.