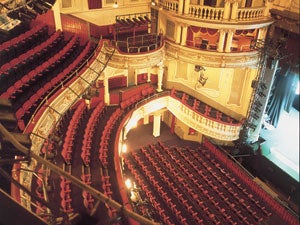 Vesta Tilley laid the foundation stone of what is now the Sunderland Empire on 29 September 1906 and took to the stage on 1 July 1907 to officially declare it open. The theatre was masterminded by two of the contemporary heads of British theatre, Edward Moss and Osward Stoll but it was a third man, Richard Thornton, who bears far greater significance to the Sunderland Empire. Thornton, originally from South Shields, came from the lowly beginnings of a busker on Marsden sea front and went on to become the manager of a run down music hall in Union Street, South Shields.

Thornton generated enough capital from this venture to rapidly climb the theatrical ladder and so on his re-location to Sunderland, he quickly established control of "The Avenue Theatre and Opera House" and "The Theatre Royal", sadly no longer there. In a short space of time, Thornton was successful and wealthy enough to enter into partnership with Edward Moss, thus forming an organisation that transformed the northern theatre provinces of the early 1900's.

The Thornton/Moss partnership went on to establish 'Empire Palaces' throughout the North with admission policies geared to the economic constraints of the day. This enabled the working classes to attend comfortable and clean venues and see quality productions for possibly the first time. This upgrading of theatre venues paved the way for their acceptance as centres for family entertainment.

Thornton soon became restless in this partnership and decided it was time to build a theatre of his own. His theatre was built by local architects William and TR Milburn on its present site and was known as the "Empire Palace."

The Sunderland Empire has changed considerably since 1907. Originally, the domed tower was surmounted with a revolving sphere which bore the figure of "Terpischore" the Greek Goddess of dance, not as is commonly thought, Vesta Tilley. There were many main entrances to the theatre, each of which had their own payboxes - little arched hatches in the walls where you brought your ticket and then, having gone through a tiny entrance in single file, you were able to take your seats. Incidentally, these doors can still be seen on the outside of the theatre.

After the depression of the twenties, a revival came to theatre during the late 1930's. By the outbreak of war, theatre was back on its feet with summer rep at the Sunderland Empire keeping the place open even during its normally "dark" months. During the war, a bomb exploded near the Sunderland Empire, badly rocking it. As a safety precaution, the globe and the statue of "Terpsichore" were removed. The original statue can now be seen at the head of the main staircase. A replica stands at the top of the spectacular dome.

During the forties, the theatre could do no wrong as everyone was desperate for entertainment but then came the fifties and the advent of television and cinemascope. A consequence of these successes meant the closure of hundreds of theatres, while the remaining ones struggled and played to ever decreasing audiences.

The owners of the Sunderland Empire decided to close rather than watch their glorious ship sink. Remarkably, the Corporation took the unprecedented step of buying the theatre for £50,000. After a short closure the Sunderland Empire re-opened as the first 'number one' theatre under civic control.

Since the re-opening in 1960 the theatre has been refurbished and re-equipped three times. The former Music Hall area of 1907 was turned into a cinema during the '70's and since then, has been turned into a function room. In 1986, the main auditorium and foyer were extensively re-decorated and wheelchair access and toilet facilities were provided into the stalls area along with a modernised bar. In 1986, the box office ticket system was completely computerised as was the stage lighting system in 1987.  In 1989, refurbishment brought n