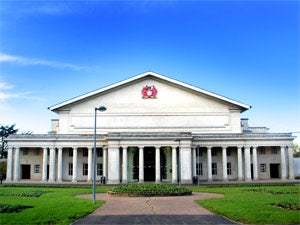 De Montfort Hall is a major concert hall located in Leicester City Centre and set in its own grounds. Originally built in 1913, it underwent a major refurbishment in 1994/95 and is a direct provision by Leicester City Council, part of the Arts section within the Regeneration and Culture department. Its infrastructure comprises a flexible auditorium that can be laid out in a number of different ways (all tiered, half standing/half seated, cabaret, dance floor etc) and with a 400 - 2200 capacity, four bars and the outdoor amphitheatre with a capacity from 250 - 7000

Despite a formidable reputation for legendary appearances by major acts  (all the usual Sinatra/Ellington, Beatles/Stones, Hawkwind/Roxy, Clash/Jam, Duran/Spandau or Roses/Manics stories depending on your age), right up to the early 1990’s the Hall was basically a ‘four walls and a diary’ hire venue.  These shows were never as frequent as popular folklore would have you believe, but nevertheless, like many similar venues nationwide, the Hall suffered strongly from the substantial changes in the patterns of live touring from the late 80’s onwards, and in particular the development of the arenas. Unlike many, it has taken the process of re-invention very seriously.

The Hall is now engaged in significant artistic and audience development plans and is a critical part of the emerging cultural, capital, and arts strategies for the City.